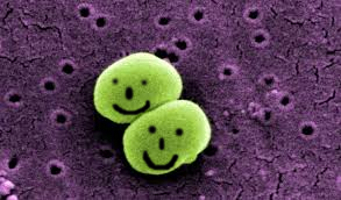 It is crucial to consume bacteria in your diet, (as well as foods that support and develop colonies of healthy bacteria)

The health of our gut is quite important, in fact, having a healthy gut could go a long way in assuring a healthy body weight. Recent clinical trials have confirmed that healthy bacteria in the gut is not only responsible for overall health but could be beneficial for weight loss.

Clients, readers and others that have not received the Dietmy unbalanced one week bacterial cleansing diet will be pleased to know that it will be published in the next few weeks. The title is to be: One week bacterial cleansing diet and tagline, for quick weight loss, based entirely on raw and high bacteria foods. (Please subscribe to the mailing list to receive notice of when it is available.)

Crucial bacteria for weight regulation are anaerobic and acidic loving, like the Lactobacillus family (found in Sauerkraut and similar foods).

More information about important bacteria that you need to cultivate and colonise in your own gut:

1. Bifidobacterium Bifidum
B. bifidum is a prominent probiotic microorganism that lives in the walls of the large intestine (and also in the vaginal tract) B. bifidum takes food from these unfriendly bacteria and yeast making it difficult for the bad bacteria to colonise and grow. B. bifidum produces lactic and acetic acids, which lower the intestinal pH (lowers acidity) this action also prevents the undesirable bacteria from growing. This bacteria also helps you to digest minerals such as iron, calcium, magnesium and zinc.

2. Bifidobacterium Infantis
Bifidobacterium infantis is an important organism shown to stimulate production of immunomodulating agents such as cytokines. They styrenthen and support your immune system and attack pathogens such as Clostridia, Salmonella, Shigella and more.

3. Bifidobacterium Longum
These guys do all the same things as B. bifidum (They also produce lactic acid, suppress colonisation of bad pathogens and asssist with the digestion of minerals) What these little guys also do is to reduce the effects of gastrointestinal disorders (Established via scientific double blind clinical trials) during antibiotic use. B longum is an excellent pro biotic.

4. Enterococcus Faecium
E. faecium has been shown to significantly lower LDL cholesterol. The World Health Organisation has funded extensive research which indicate not only the general benefits of E. faecium but also that these little guys fight for you when bad pathogens like Rotovirus and others attack.

7. Lactobacillus Brevis
Lactobacillus brevis is a lactic acid producing organism important in the synthesis of vitamins D and K.

8. Lactobacillus Bulgaricus
Lactobacillus bulgaricus is considered a transient microorganism that does not implant in the intestinal tract, but still provides an important protective role. This organism is used extensively in the commercial fermentation of yogurt. Production of lactic acid by the bacterium provides a favorable environment for the growth of other lactobacilli and bifidobacteria residing in the intestine. Some studies indicate that certain strains of L. bulgaricus modulates the immune system.

9. Lactobacillus Casei
Lactobacillus casei is closely related to the L. rhamnosus and L. acidophilus strains with some of the same immuno-modulating effects as other Lactobacilli. L. casei has several health-promoting effects provided through the production of bacteriocins, compounds that inhibit the growth of pathogenic bacteria in the small intestine.

10. Lactobacillus Plantarum
Lactobacillus plantarum secretes the naturally occurring antibiotic lactolin, and is also known to have the ability to synthesize the amino acid L-lysine, which has beneficial anti-viral activities. L. plantarum also produces glycolytic enzymes shown to degrade cyanogenic glycosides and is effective in eliminating nitrate while producing nitric oxide. This effective pro biotic can preserve key nutrients,vitamins, and antioxidants. It can also eliminate toxic components from food and fight pathogen colonisation.

11. Lactobacillus Rhamnosus
Lactobacillus rhamnosus is mostly found in the small bowel. L. Rhamnosus has a high resistance to bile salts and adheres to the intestinal mucosa to protect the intestinal tract against the invasion of harmful microorganisms. Additionally, this organism assists with lactose intolerance. A recent double-blinded, placebo-controlled study suggests that this probiotic bacteria may decrease hypersensitivity reactions as well as intestinal inflammation caused by food allergies. L.rhamnosus has been found to have significant benefits in the nutrition and well-being of infants and in the elderly. According to research with this strain, administration of L. rhamnosus is most helpful in inhibiting early intestinal infections in infants. This species of Lactobacillus does not only colonize, acidify and protect the small intestine, but it can quickly establish itself in the large intestine, inhibit the growth of streptococci and clostridia, create anaerobic conditions which favor the implantation of bifidobacteria,and produce biologically desirable lactic acid.

12. Lactobacillus Salivarius
Lactobacillus salivarius is important in normalizing the gut flora of those dealing with chronic bowel conditions and shows potential as an effective inhibitor of H. pylori, an organism associated with the occurrence of ulcers.

13. Streptococcus Thermophilus
Streptococcus thermophilus, in combination with L. bulgaricus, is used commercially to produce yogurt. This organism is known to be efficient in breaking down lactose by producing the enzyme lactase.
Those who are lactose-intolerant may be greatly helped by eating more of this particular bacteria.

By following my unbalanced one week bacterial cleanse diet, you could completely revamp the bacteria in your gut and even after one week, you may feel better, have higher energy levels and experience an increase of overall body health.

Being fat could lead to early death